Fox or Coyote? How to Tell Them Apart, Read on

In the early spring and summer, coyotes seek easy prey to keep up with the food demands of their pups. “Easy prey” may include cats and dogs in suburban areas, and young livestock (lambs, chicks) in rural areas. There may also be complaints during the fall, as young coyotes try to establish their own territories, because that can be a noisy process. But they’re fussing among themselves, and tend not to wrangle with dogs then.

Coyotes in urban areas often become accustomed to humans if there is a food source in the neighborhood, and coyotes in particular look for easy meals. These clever creatures get into pet food and unsecured garbage cans. In urban and suburban areas, coyotes commonly prey on domestic house cats, small dogs, poultry, and other domestic animals. Another issue is livestock depredation on many ranches against cattle and sheep. Coyotes and Red Fox have been known to attack humans and attacks are becoming more and more prevalent. Disease risks include; Distemper, hepatitis, parvo virus, rabies, mange, and tularemia. 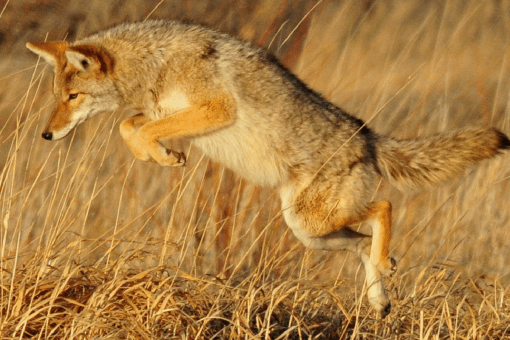 Eastern coyotes (Canis latrans) typically weigh 30-50 pounds and are 48-60 inches long, approximately twice the size of their close relative, the western coyote. Eastern coyotes have long legs, thick fur, a pointy snout, a drooping bushy black-tipped tail and range in color from a silvery gray to a grizzled, brownish red.

Coyotes are crepuscular, elusive, adaptive, intelligent animals that manage to hold their own when living in close contact with humans. Coyotes are opportunistic omnivores, meaning a coyote's diet depends on what is easy to find, scavenge, or catch and kill. Coyote diets are diverse and vary throughout the year based on seasonal availability. Annually, their diet includes white-tailed deer, rabbits, small mammals such as mice and voles, raccoons, groundhogs, birds, insects, and plant materials. 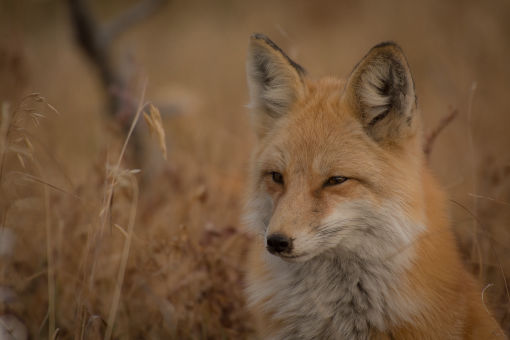 The red fox (Vulpes vulpes) is the largest of the true foxes and one of the most widely distributed members of the order Carnivora, being present across the entire Northern Hemisphere including most of North America,

On average, adults measure 14–20 in. high at the shoulder and 18–35 in. in  length with tails measuring 11.8–21.9 in. Weights range from 5–31 lb. They trot at a speed of 4–8 mph, and have a maximum running speed of 30 mph. They are very agile, being capable of jumping over 2-metre-high (6 ft 7 in) fences, and swim well. Foxes may be infected with leptospirosis and tularemia. They can also act as vectors in spreading erysipelas, brucellosis and tick-borne encephalitis. 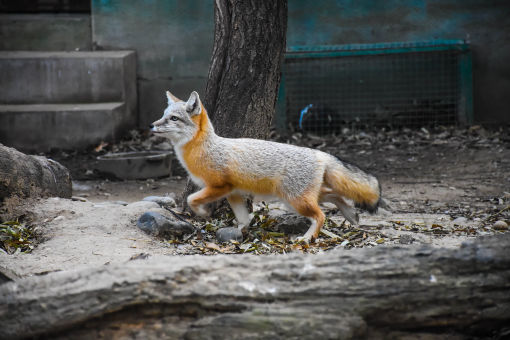 The gray fox is mainly distinguished from most other canids by its grizzled upper parts, black stripe down its tail and strong neck. The gray fox ranges from 30 to 44 inches in total length, the tail measures 12 inches of that length. The gray fox typically weighs 8 to 15 lb, though exceptionally can weigh as much as 20 lb.

It is the only American canid that can climb trees.

The gray fox is an omnivorous, solitary hunter. It frequently preys on the eastern cottontail in the eastern U.S., though it will readily catch voles, shrews, and birds.